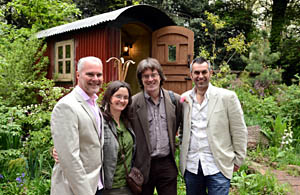 In a Chelsea first, Plankbridge exhibited the first ever shepherd’s hut to be seen at the world famous flower show. It was adapted as a special writer’s hut and exhibited in the Artisan Garden category.

The Plankbridge Hutmakers Ltd Garden was inspired by the Dorset countryside made famous by Thomas Hardy in Far From the Madding Crowd and will evoke feelings of peace and nostalgia. The centrepiece of the garden was the beautifully handcrafted shepherd’s hut which is based on the hut that features in the opening scene of the book.

Plankbridge Hutmakers, who have revived the craft of making and restoring antique shepherds’ huts, were exhibiting at RHS Chelsea for the first time. 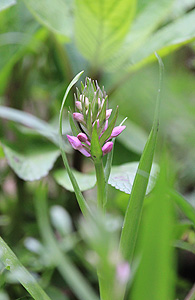 Garden designers (and previous Chelsea gold medal winners) Adam Woolcott and Jonathan Smith used heirloom varieties of heritage vegetables in the garden, displayed in rustic containers to showcase their unusual and striking characteristics. The majority of the plants were British native wildflowers and the planting was loosely based on an area of water meadow at Waterston Springs, in the middle of “Thomas Hardy Country”.

The garden included different habitats ranging from heathland to meadows (water and traditional) as well as a selection of  British native trees and shrubs such as beech, sweet chestnut, oak, field maple and dog roses. Other highlights included the southern marsh orchid, which is native to Hardy’s Dorset, as well as their triple Gold winning stinging nettle. 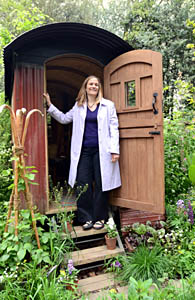 Tracy Chevalier, author of best selling book Girl With a Pearl Earring, stopped by to try out the writers hut. She was writing sections of her new book which tells the story of a Victorian Quaker who emigrates from Dorset to America in 1850. It will be published next year.

The Plankbridge Hutmakers Ltd Garden was awarded a Silver medal.

Chelsea regular and ornamental grass specialist Neil Lucas from Knoll Gardens was taking a break from exhibiting this year but he was an RHS judge in the Great Pavilion.

“It was challenging as always,” says Neil. “I had a slightly odd feeling as it was the first time in a decade I have been there without an exhibit, but there’s always an energy about Chelsea that’s great to be part of,” he said. 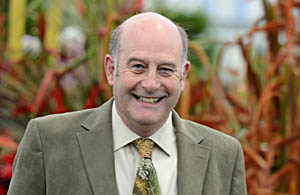 Although not a judge of the Artisan Gardens, he said he was impressed with the effect of the Plankbridge Hutmakers Ltd Garden.

Among  the trade stands were Cranborne Stone who returned to RHS Chelsea after a five year break. Their stand showcased garden ornaments and landscape features such as Victorian urns, leaf vases and planters. New for RHS Chelsea 2012 was their reverse balustrade screening, designed as a contemporary take on the traditional balustrade. 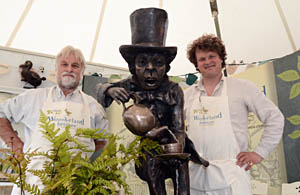 Wonderland Bronze presented a series of bronze figures, based on classic characters from English literature, hand crafted in Dorset. Modelled in terracotta and cast into bronze using the cira perdu (lost wax) process, this collection was lovingly handcrafted by Robert Ellis and James Coplestone of the Robert James Workshop.

This year they had a larger than life Mad Hatter and a Caterpillar smoking upon a mushroom – two new editions for to the collection. Robert Ellis and James Coplestone were also sculpting ‘live’ their new creation from Charles Kingsley’s ‘The Water Babies.

Plankbridge Hutmakers count down to Chelsea 2012