Plankbridge Hutmakers count down to Chelsea 2012

For Richard Lee and Jane Dennison, there have been many milestones along their journey to RHS Chelsea 2012. They are making the first ever shepherd’s hut to be exhibited in a Chelsea show garden, of which they are justifiably proud. 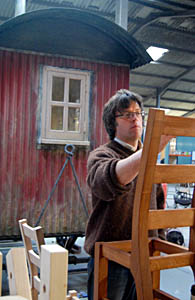 Designed by Adam Woolcott and Jonathan Smith, the Plankbridge Hutmakers garden is an authentic Dorset wildflower garden, based on Richard and Jane’s garden at Waterston Springs. It features a scaled-down shepherd’s hut as its centrepiece and will be in the Artisan Gardens area of the show which is devoted to British craft skills.

‘Making a smaller hut has been a challenge and the fact it’s for Chelsea is nerve-racking, but it’s turned out very well,’ says Richard Lee co-owner of Plankbridge. ‘We’ve added extra craft details such as the curls to the lead flashing on the windows, a curved Oak dooor and we’ve used some traditional techniques, such as steam-bending the oak ceiling ribs. A local craftsman, David Higgs from Maiden Newton helped us with specialist work on the windows and a scenic artist Jonathan Holbrook, who worked on Pirates of the Caribbean, weathered the hut, to make it look more lived-in.’

Getting the hut onto the site at Chelsea will require meticulous planning. Luckily, Adam Woolcott and Jonathan Smith are triple Chelsea Gold Medal winners with a wealth of experience of the show. They will be using many native wildflowers, shrubs and trees from Dorset including the lesser butterfly orchid and the southern marsh orchid. The southern marsh orchid is a beautiful purple flower that’s notoriously difficult to grow but flourishes at Plankbridge, where 350 were counted last year. A specialist orchid grower Laneside Hardy Orchids has the responsibility of bringing these orchids into flowering perfection for the Queen’s preview on 21 May. Adam and Jonathan, who are from Hertfordshire, have spent time examining all the plants in Richard and Jane’s garden, and have even dug up gravel from their stream to take to Chelsea. 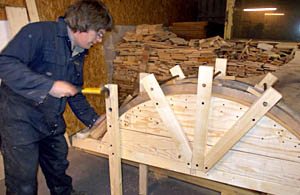 ‘It’s all about the detail,’ says Adam. ‘With a garden like this, every plant and feature has to be authentically Dorset. Our biggest challenge at the moment with the plants is lack of sunshine but they are doing pretty well and we’re happy with them. This is exactly the kind of garden we like to design; the hut looks great and we’re taking our lucky stinging nettle which has featured in all our winning gardens to date.’

Jane Dennison, co-owner of Plankbridge is in charge of dressing the hut’s interior for the show. ‘The hut is fitted out as as a writer’s retreat and on press day, Tracy Chevalier will be using it to work on her latest novel,’ she explains. ‘I’d like to bring the garden in with some wildflowers and and generally the hut will look like a writer has just got up and left – feminine, a bit quirky, with literary cues. Our leather worker Ben Loder has done a lovely job on the desk; Richard is hand-building a chair. so we just need a few homely touches to bring it all to life.’