Knoll Gardens made it a fantastic 10th gold medal winning year at Chelsea Flower Show. The specialist grass and perennial growers from Wimborne impressed judges with their immaculate stand of more than 50 grasses which included several new varieties.

One of the new plants shown by Knoll was a striped cream and green Hakonechloa macra Samurai – a different variety of which Diarmuid Gavin showed in his Sky Garden.  Other new grasses on show were Sesleria Greenlee’s Hybrid – a semi-evergreen plant which forms bright green mounds with whiteish flowers in the summer, and Deschampsia Marin, a tufted grass that forms dense, compact clumps and has striking rounded flowerheads.

Neil Lucas, owner of Knoll Gardens, also took the opportunity at the show to launch his first ever  book ‘Designing with Grasses‘.    It  offers a practical approach to gardening with grasses and provides an essential guide to the way that they can be used to best effect. ” Designing with Grasses is for everyone who has visited Knoll and wanted to know more, as well as those who are interested in combining a beautiful garden with sound environmental principals,” says Neil.

Joining Neil on his stand was internationally renowned furniture maker John Makepeace whose own garden at Farrs in Beaminster, Dorset, is full of grasses – a plant choice he was drawn to because of his attraction to their strong forms and the fact that they are pretty low maintenance. Favourites include Miscanthus sinensis ‘morning Light’ and Stipa gigantaea ‘Gold Fontane’. Makepeace’s furniture designs are rooted in a broad and relentless exploration of the inter-relationships between architecture, craft and ecology that have taken him in many different directions but the piece he chose to display on the Knoll Gardens stand was a copper topped, limewood table with a striking surround of carved and painted English fruits. It certainly drew attention. 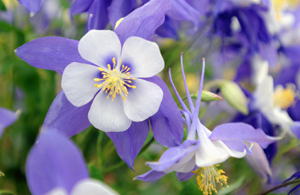 There was further medal success for Dorset exhibitors including Three Counties Nursery – specialist growers of F1 hybrid aquilegias. Based in Bridport, the nursery is run by Ann and David Hitchcock. Their colourful display in the floral Marquee earned them a bronze medal.

Garden furniture was on show from Fantails of Swanage and Sitting Spiritually Ltd of Lyme Regis. Designs-in-Stainless (based in Semley) generated plenty of interest with their stainless steel water features and Niwaki of Shaftesbury had a great selection of  pruning tools and tripod ladders.

Dorset has a wealth of horticultural talent and the 2011 RHS Chelsea Flower Show showed some of the best the county has to offer.