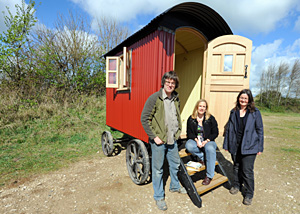 Dorset novelist Tracy Chevalier has been advising Plankbridge Hutmakers on the writer’s hut for their garden at this year’s Chelsea Flower Show.

The special shepherd’s hut they are building for Chelsea has been adapted as a writer’s retreat in honour of Thomas Hardy, Dorset’s most famous writer. Scenes from Far From the Madding Crowd, including those with shepherd Gabriel Oak, were set in fields near Piddlehinton where the shepherd’s hut makers are based.

Tracy says: ‘I love the shepherd’s hut. Having a portable room of my own like that would be very inspiring, and helpful to get me away from the rest of my life. Sadly my garden in Dorset is too small for one, but you can always dream.’

On press day, Tracy will be in the hut working on the manuscript of her new novel (to be published in spring 2013) which tells the story of a Victorian Quaker who emigrates from Dorset to America in 1850.

The Plankbridge Shepherd’s Hut Garden can be seen at stand SEW7 at Chelsea Flower Show, 22nd – 26th May 2012.