The weekend of 21 September sees the inaugural art exhibition at a converted chapel in Sturminster Newton, with a show by three talented Dorset artists.

The Workhouse Chapel was opened last year as a studio and art space, following renovation. The three artists – Billie Willcocks, Colin Gosden and Mike Jackson – chose this as the ideal space to showcase new works. The two painters and one wood turner are influenced by the local landscape. In their show – “Dimensions, an exploration of form, space and colour” – they are unveiling a series of contemporary art works in paint and wood that represent new directions for them. The artists will be selling affordable art, greetings cards and limited edition prints.

Billie Willcocks, from Chideock, first lived in Dorset when her parents re-located from London. She studied at Yeovil Art School and Bath Teacher Training College, and has lived in a number of parts of Dorset including Wimborne. Billie is a mixed media painter using imaginative interpretation of her subject matter to convey strong emotional responses. Well known for her vibrant paintings of the Dorset coast, including West Bay, she is showing a series of colourful new works. 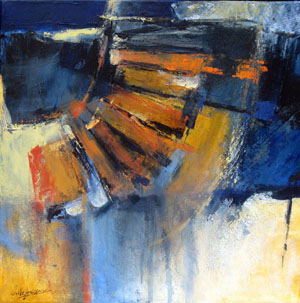 Mike Jackson grew up in Bournemouth and studied at Bournemouth College of Art. He worked for many years as a graphic designer and art director within the advertising industry before moving to Evershot in West Dorset to focus more on his painting. Last year Mike won the Stella and Trevor Jones Award for Contemporary Art at the Dorchester Art Club Open Exhibition. His work explores the effects of the elements and light on the Dorset countryside and coastline. He will be exhibiting a new series of bold abstract paintings, many of which are inspired by the Jurassic coast, particularly Kimmeridge.

Colin Gosden, from Yetminster, is a highly respected contemporary wood-turner, who has worked with wood for most of his life. Colin uses colour, texture and asymmetric form to create wooden pieces with visual and tactile interest which often explore feelings of movement and motion. He works mainly in home-grown hardwoods, creating form and texture by utilising naturally occurring ‘faults’ and degradation in the material.

The three creative talents met through Dorset Art Weeks, the bi-annual open house by local artists. Colin Gosden explained: ‘the three of us became friends through Dorset Art Weeks. This inspired us to organise our own exhibition. Our work is all rooted in the Dorset landscape but with two different painters and my wood sculpture we have something to offer everyone.”

Billie Willcocks said “we are all showing entirely new pieces which take our work in new directions. Organising our own exhibition has inspired us all to really stretch our creativity and develop new approaches.”

Mike Jackson said the artists were delighted to be showing at the Workhouse Chapel in Sturminster Newton: “This is a great space, lovingly restored and the perfect setting for displaying art. Sturminster Newton is a pretty and bustling little town with some super cafes and pubs – so well worth a visit.”

The Workhouse Chapel is a beautiful Grade 2 listed building which has been lovingly renovated and extended as the studio of local felt-maker, Rose Hatcher. Rose is delighted to host the show: “I am thrilled that three such talented artists have chosen the Workhouse Chapel Gallery as the venue for their exhibition”. The chapel – also known as All Saints Chapel – was built in 1891 as part of Sturminster Newton’s Union Workhouse. In more recent years Sturminster Newton Museum was based at the chapel until the council moved the museum to town centre premises in 2007. This is the first art exhibition at the Chapel Workhouse, and is sponsored by Robert Frith Optometrists.