Sculpture by the Lakes won Gold at the South West Tourism Awards for the category of ‘Small Visitor Attraction of the Year’. The ceremony took place in the Great Hall of the Grand Pier in Weston-super-Mare, Thursday 12th February. 98 different awards were announced from a remarkable 425 entries. 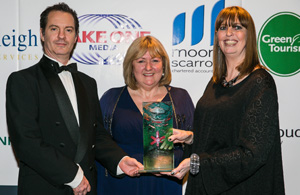 Alongside Sculpture by the Lakes, Wiltshire’s Wadworth Brewery Visitor Centre also won gold. Newquay Sea Safaris and Fishing, and The Telegraph Museum picked up Silver, and Corinium Museum, Cirencester and Stuart Line Cruises, Exmouth won the Bronze award. Sculpture by the Lakes have also been selected to represent the region in the National Visit England Awards.

Founder and sculptor, Simon Gudgeon, says “We were amongst strong candidates, from many different walks of life, and we feel very honored to have won Gold with Wiltshire’s Wadworth Brewery Visitor Centre. The team at Sculpture by the Lakes work with great creativity and passion, and we couldn’t have won without their hard work”