The people of Dorset came out in less than perfect weather to give a big welcome to Her Majesty The Queen and her husband The Duke of Edinburgh. The visit formed part of her Diamond Jubilee tour of the South West. 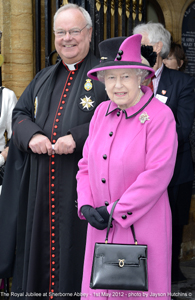 The Queen arrived by Royal Train at Sherborne station wearing a colourful pink coat and matching hat, with black detailing and buttons. She travelled by car to Sherborne Abbey where they visited a Mad Hatter’s Tea Party on the eastern lawn of the Abbey Close. The Royal Couple then went in different directions, The Queen to visit a Dorset Food Fair on the western lawn, and The Duke to visit a display by local artists and craftsmen and women in the Abbey. Founded in AD 705, the abbey incorporates Norman architecture, an etched glass window by Laurence Whistler and beautiful fan-vaulting (the earliest large-scale example in England). King Ethelbald and King Ethelbert are both buried there.

The Queen and Prince Philip then came together at the Abbey door where The Queen unveiled the design for a commemorative flag stone to be placed in the floor of the porch. Letter cutter Andrew Whittle, from Evershot designed and will cut the stone. The Queen and His Royal Highness then visited a 1953 Tea Party at the Digby Memorial Church Hall.

The Queen also met some of the gathered crowds. One of the things that drew her eye were some patriotically dressed corgis which she stopped to pet.

Plenty of shops had dressed their windows with union jack flags and bunting to celebrate her return visit to Sherborne – a place she last visited 14 years ago to unveil a window at Sherborne Abbey.

The Vicar of Sherborne, Canon Eric Woods, said ‘The visit has gone extremely well, and the enormous crowd has been a tribute to the affection the community has for The Queen and Prince Philip. The planning has taken many months – mostly under conditions of strict secrecy – and only in the last few weeks have we had the green light to bring everyone together. 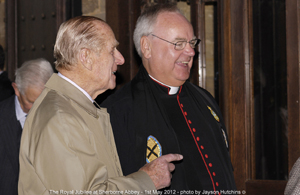 The Duke of Edinburgh with Canon Eric Woods. Photo by Jayson Hutchings Imaging

All the organisers and participants in the Visit worked splendidly together, and the Royal Couple obviously enjoyed themselves enormously. The rain stopped just as the Royal Train arrived, and after that there was not a hitch. My one fear was that I would not be able to get The Duke out of the Abbey in time to be reunited with The Queen – he is very much his own man! – but we finished right on cue. It was a huge honour for Sherborne to be chosen as the only Dorset location in the Jubilee Tour, and it was a day which will long be remembered by the people of Sherborne and beyond.”

Marjorie Snowden, Mayor of Sherborne said it was “the most exciting thing to happen in Sherborne since the Queen unveiled the West window in Sherborne Abbey,” which was in 1998.