Shortlisted for two prizes at the recent UK Festival Awards, Larmer Tree Festival returned for its 24th year in the beautiful grounds of Larmer Tree Gardens, near Salisbury, on the Dorset/Wiltshire border.

One of the most popular vocalists of all time, Tom ‘The Voice’ Jones has sold over 100 million records during a career spanning more than 50 years. His accolades include the Grammy Award for Best New Artist in 1966 and the Brit Award for Outstanding Contribution to Music, in 2003.

Larmer Tree Festival were treated to an amazing set and a great atmosphere, singing along to Tom Jones’ classics, as well as hearing tracks from his latest albums Spirit in the Room and 2010’s Praise & Blame. 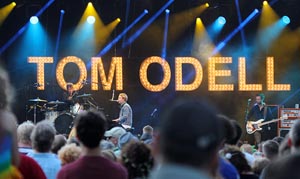 Memorable moments included surprise guest appearances from Will Varley and Frank Turner during Beans on Toast’s sun-drenched Friday afternoon set. Laughter also resounded on the Main Lawn as the resident peacocks joined in with Ade Edmondson and The Bad Shepherds, invading their performance on the painted Victorian Garden Stage.

12 comedians took to the ARC stage for a series of side-splitting night-time comedy shows. Lee Nelson, Mark Watson, Chris Ramsey and Paul Foot blew the roof off while the crowds lined the aisles and piled in at the side of the stage for a late-night laugh.

Radio 2 legend Johnnie Walker and the Pitt Rivers Museum who brought the fascinating history of the gardens to life. Meanwhile on the Larmer Lawns, families gathered for fun and silly shows, the Bubble Boogie Disco being the Saturday afternoon highlight in the sunshine.

Later into the night, The Social and The Big Top venues were busier than ever this year with a credible roster of music acts, including The Selecter, Dreadzone and Dub Pistols leading the party with DJs keeping the crowds dancing until 4am.

Songs from the Shed were in residence throughout the festival and recorded 43 different bands and artists performing a one-song acoustic session. While Stornoway reduced one festival-goer to tears with their performance, the outstanding act was CoCo and the Butterfields who popped into the shed before their Garden Stage set on Sunday.

A competition to find two breakthrough acts saw fresh new talent play to the Larmer crowds. Salisbury-based Lily McCauley was the winner of the Singer/songwriter category and Welsh hillbilly country punk band The Bleedin’ Noses won the band slot. The breakthrough acts beat around 300 hopefuls and won the public vote.

Official charity partner the Trussell Trust hosted a busy Social Enterprise tent in the Village offering workshops and events all weekend. Their Rag Tutu workshop proved an exceptional success with festival-goers clad in tutus all weekend. They raised £3,019 during the festival.