It was the hottest and driest Larmer Tree Festival for years and as usual it was a good one.

This  year, Van Morrison opened the festival as the headliner on the Wednesday night, breaking with the tradition of booking Jools Holland. There were certainly a lot of Van fans in the audience and the village of Woodgreen had so many it ran a minibus to the event.

Thursday night’s main stage played host to 80’s favourites Dexys, formerly known as Dexy’s Midnight Runners. They  played their 2012 album One Day I’m Going to Soar in order and in its entirety, followed by a remixed Geno, a song about Geno Washington which gave them their first UK number 1. Notably missing though was their biggest hit Come On Eileen, although Kevin Rowland was wearing his trademark dungarees. Despite requests from the audience, the song didn’t materialise.

Sticking with the 80’s theme, The Beat played to a packed Big Top – the tent was so full that people were spilling out, dancing to the ska sound from within.

Hillbilly blues musician Seasick Steve took to the stage on Friday , entertaining the crowd with his obscure and personalised instruments including The Three-String Trance Wonder. Much to the delight of one chosen young lady, Seasick Steve invited a member of the audience up on stage to serenade.

Irish singer Imelda May had the main stage audience dancing on Saturday night with a a blend of rockabilly, blues and jazz. It was the second appearance for Imelda at Larmer Tree Festival, having appeared previously in  2011. 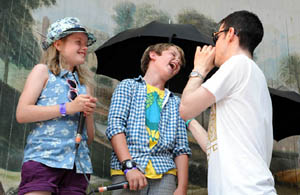 Beatboxer Schlomo entranced children and adults alike with his performance and workshop on Sunday on the Garden Stage. Seemingly impossible noises were created by him and he shared  the secrets of how to make them. People young and old were making ‘P’, ‘T’ and ‘K’ sounds to simulate drums. The highlight for 4 young children was being invited onto the stage for a beatboxing competition.

The day  was a riot of colour with the carnival in the afternoon; this year with the theme ‘Into the Unknown’. The sound and vibrancy of the carnival wound its way through the festival site, showcasing the work of those attending the carnival workshops: The Searchers (adults’ group), Galactic Fantastic! (YouthZone) and Secret Seaworld Seekers (children’s group).

The troupe of more than 500 people included carnival band the Magic Drum Orchestra, The Grass Ladies of Gobbledegook Theatre, Samba Penashe,  a giant octopus and a huge peacock which pecked its way across the crowds.

As Sunday afternoon turned into evening, the main stage came alive with KT Tunstall who got everyone in the dancing mood. Folk band Bellowhead followed her and had the crowds in jumping spirits. 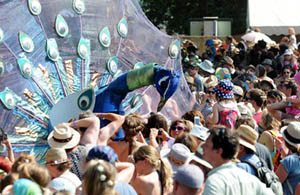 There was plenty going on as well as music. The magical Lost Wood was the venue for light shows, a camp fire,  poetry and storytelling and the festival had even more to grab your attention with top quality comedy, Mark Kermode’s Film Club, random street theatre and free workshops including willow weaving, felt making and creating Dorset buttons.

A popular craze for this year was playing Pucket – a fast moving board game involving shooting all of your counters via a piece of elastic to your opponents half of the board before they can do it to you. Playing the game was free but if you thought that  you were good enough, for a small fee you could challenge the Grand Master with a prize of £10 if you beat him. We didn’t see anyone beat the Grand Master but plenty tried.

To top it all, a spectacular lightening display closed the festival with forks of light zigzagging across the festival ground. A year to remember!