The Gallery at Sculpture by the Lakes is staging the second edition of DRAWN, an exhibition of drawings by acclaimed international artists (7 November – 5 December). This follows the hugely successful first incarnation of DRAWN, which was the inaugural exhibition at The Gallery when it launched last year.

Renowned British artist Simon Gudgeon, founder and owner of Sculpture by the Lakes, will curate the exhibition, bringing together talented draughtsmen from around the world. He comments: “By devoting an annual exhibition to drawing, I hope to further highlight the importance of the medium, not only as a fundamental skill for all artists but also as a personal and immediate form of expression. After the fantastic response to our first DRAWN exhibition, I look forward to unveiling the new works in November.” 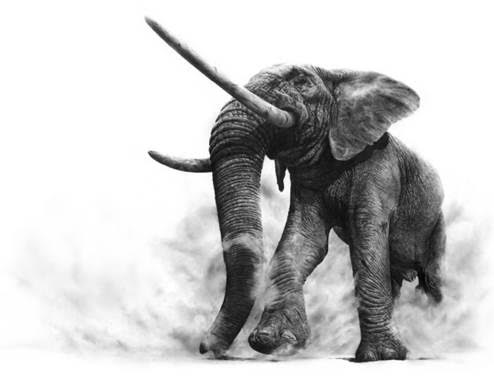 Drawing the human figure is a skill studied by many artists, but mastered by few. Participating artist Zoey Frank will exhibit examples of her unflinching, photorealistic drawings of the human figure using subtle tonality to expose every contour of the body. Andrew Denman will showcase a new body of work entitled The Icarus Series, depicting Icarus at different phases of his tragic story. Denman’s work joins that of artists throughout history who have found inspiration in this symbolic tale. His meticulously observed works marry the male figure with wings modelled on an albatross, frigate bird and eagle.

The depiction of birds unites the work of other artists exhibiting in DRAWN. Montana-based Dennis Boyd has been interested in waterfowl from an early age, and his charcoal sketches of Canada geese demonstrate his ability to instinctively capture their forms and behaviour. Leon van der Linden’s precise works look more to the tradition of wildlife illustration, carefully documenting birds of prey and owls by recording each feather on the page.

The scrupulous observation of wildlife is also apparent in works by Guy Combes, David Filer and Dale Marie Muller. Guy Combes lives and works in Kenya, and his drawings convey with startling realism the African wildlife he is passionate about conserving. His leopard in the work Equilibrium emerges from the dark background almost into the viewer’s space. Similarly, the bull elephant in David Filer’s large-scale drawingThe King, appears to thunder towards us. Filer uses a dramatic viewpoint and composition to convey the power of his subject. By contrast, Dale Marie Muller’s Fold depicts a lifeless wasp with delicately translucent wings, resulting in a sombre but equally striking image.